An RV surge protector is a must-have for all RVers. You may not hear people talk about it much, but it can save your electrical system. Keep reading to learn about these devices and why you need one for your RV.

What Is an RV Surge Protector?

How Does It Work?

A power surge is usually a spike in voltage that can be caused by lightning, a grid problem, or even your neighbor doing something wrong. These voltage spikes are usually very short but very high and can cause all kinds of damage.

A surge protector includes a special circuit that consists of resistors, capacitors, and special diodes that react to high voltages. This circuit is designed to absorb or “shunt” the damaging power away very quickly. Sometimes however in very large surges the surge protection circuit can become damaged and fail. Better the surge protector than your electronics, however.

Do You Really Need a Surge Protector for Your RV?

If you’re new to RVing, you might think an RV surge protector is just one more thing to buy. But do you really need it? If you ask us, the answer is a resounding YES!

Without a surge protector, you could destroy your RV’s electrical system. It could also damage any electronics you have plugged in at the time of a power surge. So, for a few hundred dollars, you can avoid thousands of dollars of damage.

Why You Need a Surge Protector for Your RV

Protection from power surges is the most obvious reason for owning a surge protector. Power surges might seem unlikely to happen, but it’s not a risk you should take.

Some protectors can also detect shore power problems. These could be related to incorrect wiring or damage to a power pole. When you pull in at a new RV park, there’s no way to know if the power pole is working correctly until you plug in your camper. If there is a problem, the RV surge protector should do its job and protect your electrical system.

A surge protector also protects from an open ground. If you’re not familiar with the term, an open ground means there’s faulty wiring or connections in the power pedestal.

A ground is typically a wire connected to a power source that allows excess electricity to exit the system if there’s a wiring issue. In this situation, it’s possible for the RV’s frame to become electrified and the entire RV can become a shock hazard. If something’s wrong with the ground or an outdated power pole doesn’t have one some surge protectors can warn you of the issue.

Low voltage might not seem like a big issue, but it can cause your appliances to overwork and melt components, potentially causing an electrical fire inside your RV.

Now that you understand why these devices are so vital, let’s take a look at the best RV surge protector. That way, you can worry less and vacation more!

Our top pick for RV surge protectors is the Hughes Watchdog line. The surge protectors come in both 30 and 50-amp versions. They offer Bluetooth connectivity to easily read information about the circuit and errors on your phone.

Another feature we love about the Power Watchdog series is that the surge protection unit is replaceable. Yes, this means that if a big surge damages the circuit while protecting your RV, you do not have to throw the unit out. You can fix it!

We highly recommend getting a Power Watchdog unit with EPO functionality as well. This stands for “Emergency Power Off” and will disconnect your RV automatically during any unsafe conditions. 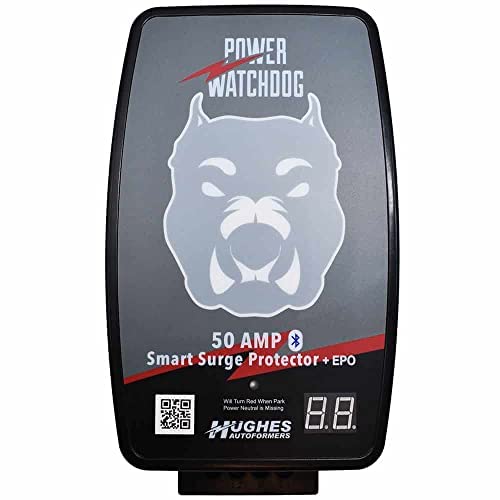 We personally use this surge protector and Tom has given it his electrical engineer stamp of approval (well. he is an electrical engineer and really likes it at least). They come in both portable versions or versions that can be hardwired into the RV so you don’t need to mess with it at the pedestal.

Another great feature of the Power Watchdog is that the dog’s face on the front of the EPO units glows a bright white when all is well but turns an angry red when something is wrong. An easy way to tell that there is an issue from a distance.

While these units sell on Amazon, we have partnered directly with Hughes to offer you a discount from their site if you use the code “Mortons.”

We also recommend this surge protector when connecting a 30-amp RV to a 50-amp pedestal. Learn why in our article: Can You Hook a 30 Amp RV to 50 Amp Power?

Deciding which protector you need is simple: If your RV uses 50-amp power, you want the 50-amp surge protector. If you use 30-amp, you’ll need the 30-amp model. 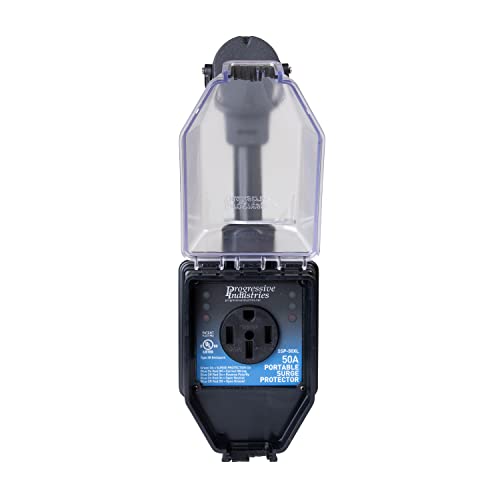 Both Progressive Industries surge protectors react in less than one nanosecond. This means they mitigate electrical problems almost instantly after they happen. Additionally, they protect from power spikes of up to 44,000 amps.

It’s also a solid choice for RVing because it’s weather-resistant and has a security lock. That way, you don’t have to worry about leaving it outside while you’re on the road. After all, it won’t do you any good if someone steals it!

You can also rest easy with this purchase. That’s because the Progressive Industries surge protector comes with a lifetime warranty.

How to Protect Your RV Surge Protector from Being Stolen

Leaving an expensive piece of equipment outside may seem like a recipe for disaster, but it doesn’t have to be. Our favorite surge protector (mentioned above) comes with a built-in locking mechanism.

If you choose to go with another product, you still have options. Some power pedestals have a cover over them that you can secure with a padlock. If that isn’t an option, you can use a strong bike lock and pass it through one of the holes on your surge protector before securing it to the power pole. 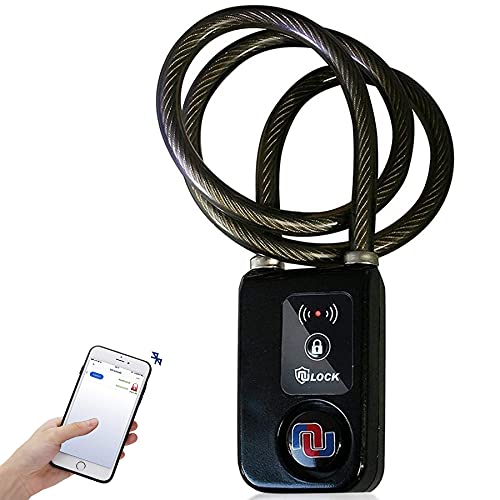 You can also purchase several security cables to make it more difficult to steal your surge protector. Sometimes all it takes to stop a crime of opportunity is a slight deterrent.

It may seem painful to spend several hundred dollars on an RV surge protector, but power surges are far more damaging. Not only are problems from electrical surges expensive to fix, but they could also cause an electrical fire. Ultimately, we think a few hundred bucks is a small price to pay for the added protection and peace of mind!

Disappointed to see that the WatchDog does not include any provision to connect the line line/load cables, such as a connector to secure the cables to the box, but merely a termination block that does not provide for any possible stress to the connection. Perhaps this is why I did not find a UL approval listed anywhere. This type of connection would never fly in a situation requiring NEC Code approval.

I have nothing to say about this article. It is really good and I love it.

We purchased the EMS-PT30X about 11 months ago and used it for 6 or 7 trips. This surge protector displays amps being consumed so you know if limits are being surpassed. A little bulking, but manageable and while it’s made for outdoor use, I tend to keep a plastic bag over the plugged in unit to ensure it’s lomg use. I use a couple of pad locks and a chain with one lonck around the cord and the other end locked to the eclectical outlet. The delay of electric flow after plugging in or an electrical interruption ensures RV components are protected. Have only used it for a couple of months and so far so good

I have used this Hughes Performance RV22050 Autoformer to prolong the life of my RV appliances. There are so many things that I like about this 30 amp autoformer: It can withstand rapid changes in moisture and heat inside the RV. It can manage up to 10% voltage boost, which is very good for our appliances inside the RV. Specially, it has LED indicator lights for convenient monitoring.

After weighing all the important details, I conclude that the Hughes Performance RV22050 Autoformer is one of the best RV autoformers in the market. It really protects appliances from being damaged due to low electricity surge.

Are you sure you've recommended listed devices? RVers should only select surge protectors and other energy management systems (EMS) that are "listed", meaning the device has a UL, CSA, ETL, or similar certification. Hughes Watchdog Series does not mention being listed, but the Progressive Industries 30XL/50XL are UL listed. The RVIA and NFPA 1192, "Standard on Recreational Vehicles", require using only listed devices. The 2020 National Electric Code also added Article 551.40(D) that requires every RV have a visual or audible alarm when there's an ungrounded (black) conductor and grounded (white) conductor reversal. Hopefully a good listed EMS will be in every RV now coming off production lines.

Mortons on the Move

You know I never actually chacked that, and now I am rethinking this, great point. I guess I'm happy ours is an external unit right now. As for the reverse polarity requirement its great to see this in code as its one of the largest hazards. I doubt the manufacturers will be installing high-quality EMS systems in rigs, but they should at least comply with the Code. I will get an article in our queue about this.