Catalytic converter theft is rising across the United States. According to the National Insurance Crime Bureau (NICB), these crimes have increased by 1,215% from 2019 to 2021.

And you could become their next victim in a matter of seconds. Unfortunately, even if you park your car in the garage at night, thieves continue to target cars parked in parking lots and other public spaces.

Today, we’re looking at why catalytic converter thefts are so common and how you can avoid becoming a victim. Let’s dive in!

What Is a Catalytic Converter?

Catalytic converters are one of the components of a vehicle’s emissions system. It helps reduce the number of harmful pollutants released through the exhaust.

Some of the best catalytic converters can reduce the number of hydrocarbon and Nox pollutants by as much as 90%. In addition to healthier air these devices are what keep our cars from smelling so bad. Have you ever been behind an old car on the road and noticed how bad it smells? This is because they lack the emissions controls of modern cars.

Starting in 1975, the Environmental Protection Agency (EPA) began requiring vehicle manufacturers to include catalytic converters on all vehicles. Whether you drive a diesel or gasoline-powered vehicle, your vehicle most likely has a catalytic converter.

Of course, those driving electric vehicles don’t have to worry about catalytic converter theft.

Can a Car Run Without a Catalytic Converter?

Vehicles without this device will run incredibly loud because the exhaust system has been compromised. If that’s not enough, you’ll likely notice decreased performance and acceleration from a vehicle without the catalytic converter. Your car will also smell terrible and the car’s computer might even shut your engine down once it senses things aren’t operating properly.

Additionally, many states have strict requirements regarding vehicles and catalytic converters. If you live in a state or county that requires annual vehicle inspections, it will most likely fail without one.

So while a vehicle can theoretically run without a catalytic converter connected to it, it’s not typically a good idea or legal to do so.

Pro Tip: Concerned about getting your stuff stolen while on the road? Find out Do People Steal Camping Gear?

Why Does Catalytic Converter Theft Happen?

Catalytic converter thefts have increased due to the value of the materials used within it. These components contain precious metals that individuals can harvest and trade for cash. The metals they can get out of them include rhodium, palladium, and platinum. These metals are among the rarest in the world and help break down pollutants.

However, while the thieves put cash in their pockets, vehicle owners must file insurance claims to cover the hundreds or even thousands of dollars in repair bills.

How Do People Steal Catalytic Converters?

Stealing a catalytic converter is relatively easy and only takes a minute or two. Thieves crawl under a vehicle and use battery-powered saws to cut through the exhaust system to quickly and easily remove the device.

Vehicles that sit high off the ground make it substantially easier for thieves to access a vehicle’s catalytic converter.

Because it doesn’t take long and the tools are relatively quiet, thieves can often go undetected. They can work from vehicle to vehicle in a crowded parking lot while attracting little to no attention.

Vehicles parked in isolated or rural areas are easy targets since the risk of getting caught is relatively low.

What Cars Are Most Targeted for Catalytic Converter Theft?

According to Carfax, the most targeted vehicles for catalytic converter theft are the Ford F-series trucks, Honda Accords, Jeep Patriots, Ford Econoline, and the Chevrolet Silverado.

The Toyota Prius also makes their top 10 and has one of the most expensive catalytic converters for vehicle owners to replace.

Which Cars Are Hardest to Steal Catalytic Converters From?

The vehicles with the hardest catalytic converters to steal are those manufactured before 1974 and electric vehicles. This is because no matter how hard thieves look, electric cars don’t have one. While these vehicles likely may have other parts thieves could take, a catalytic converter isn’t one of them.

Manufacturers like BMW, Volkswagen, Honda, and Audi have fought back against catalytic converter thefts, making it more complicated for thieves. They’ve begun installing catalytic converters further in the exhaust system so they can put them in the engine compartment.

While this newer method doesn’t make them 100% theft-proof, it does make it more difficult. Getting to these devices will take a thief more time and effort. Whether out of laziness or the risk of getting caught, most thieves will opt to move on to an easier target.

How Can You Prevent Catalytic Converter Theft?

Luckily, you can do a handful of things to protect yourself and your vehicle from becoming a victim. Let’s take a look and see what you can do!

Install an Anti-Theft Device on the Catalytic Converter

You can find after-market devices that you can install on a catalytic converter. These devices make it nearly impossible for thieves to cut through them. If they do, an alarm will sound, drawing attention to the thieves.

These devices can be expensive, typically costing a few hundred dollars or more. However, if you have a vehicle that’s a common target, they can pay for themselves. Thieves who see anything out of the ordinary won’t waste their time.

Here is an example of one product designed for Priuses as they are a high-risk car; however, you can get one designed for most vehicles or a universal fit style. 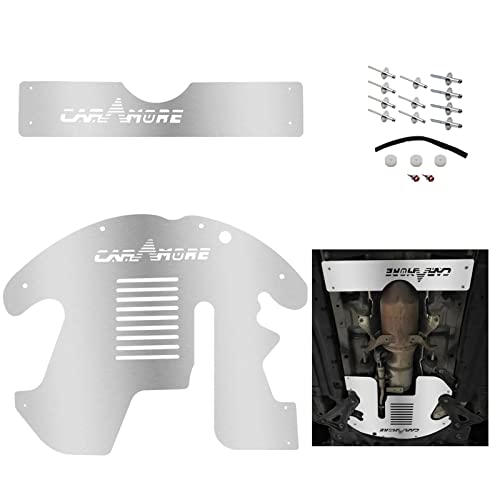 Some drivers paint their catalytic converters a bright color, which attracts attention. This signals to law enforcement or the individuals buying them that it’s likely stolen.

While law enforcement may be suspicious of anyone carrying many of these devices, seeing them marked with paint will likely only confirm their suspicions. Keep in mind that catalytic converters run very hot, and you need to use high-temperature paint or it will burn and smell terrible.

Put a Camera on Your Vehicle

Technology has made it easier for drivers to protect their vehicles. If you must park your vehicle in your driveway, having a camera pointed at it can provide some protection. Thieves may see the camera and will be less likely to mess with your stuff out of fear of getting caught.

In addition, you can install cameras on your vehicle that record its surroundings when parked in public spaces. This can give you some comfort that your car remains safe while shopping or enjoying yourself.

However, cameras may not always stop the thief from stealing from you. However, you’ll have evidence to show law enforcement if they do.

Know If Your Vehicle is a Target for Catalytic Converter Theft

It’s important to familiarize yourself with the most common vehicles that are targets for catalytic converter theft. If you own one of these cars, take extra efforts to protect your vehicle.

While trucks and SUVs may not have the most valuable catalytic converters, they’re some of the easiest to access. If your vehicle sits higher off the ground, it gives thieves more room to work with and makes it easier to get to the converter.

Pro Tip: Learn How to Prevent & Deal with Theft on the Road from our experience of having our bikes stolen.

If your insurance policy includes comprehensive coverage, it will typically cover catalytic converter theft. In these circumstances, you’ll likely have to pay your deductible.

Depending on your deductible and the cost of the new catalytic converter, this could be more or less than paying out of pocket.

Someone with minimal coverage on their vehicle will likely discover that their policy doesn’t cover the theft of a catalytic converter.

They’ll be on the hook for any costs associated with repairing and replacing the components in their exhaust system.

Should You Call the Police If Your Catalytic Converter Is Stolen?

You should immediately contact law enforcement if you discover someone has stolen your catalytic converter. They’ll likely come and file a report, which will be necessary if you plan to file a claim with your insurance provider.

Law enforcement may investigate the incident by looking for surveillance footage from local businesses. However, these crimes occur so frequently that thieves can be hard to catch, and law enforcement won’t waste time investigating every theft.

Your best bet is to make the necessary upgrades and do what you can to protect your catalytic converter. Sometimes, making it more difficult for thieves is all it takes for them to move on to an easier target.

Do you know someone who had their catalytic converter stolen? Tell us in the comments!

Had mine stolen in a transit park and ride but didn't realize it at first. I thought I just had a hole in the exhaust for a couple of days until I took it to my mechanic. I did research on trying to fine the cheapest cat converter, but they all were expensive to replace, 800 to over 1000 dollars. Talked to a chain exhaust shop who said he would replace the cat system for an "off road" exhaust that didn't require a cat converter, because I have a 2005 F-350 4X4 diesel for about the same price with all stainless-steel pipe so no rust worries for a long time.

The storage lot where we kept our Class A pusher was broken in to last Fall. Thieves cut the fence and stole the catalytic converters from most of the RV’s and other vehicles. My Phaeton was parked next to a gas powered Allegro. They skipped ours but cut the one out of my neighbors Allegro. #thankful

Mortons on the Move

Ahhh! Such a bummer to hear, seen it so many times, unfortunately :( They are even hitting dealer lots!