You are here: Home / RVing to Alaska / How to Best Explore Kobuk Valley National Park in Alaska

It’s not quite the North Pole, but it wouldn’t surprise us if you could see it from Kobuk Valley National Park. This magnificent wonderland lies way north in the United States’ very upper reaches. With no roads leading in, it’s incredibly remote and challenging to visit. The park doesn’t even have any trails. For these and many more reasons, hardcore outdoors folks love it.

It’s so hard to get to that it’s the least visited of all national parks. About 10,000 adventurous souls manage to make their way to Kobuk Valley National Park every year. They get a chance to see migrating caribou and climb the one-of-kind sand dunes that seem strangely out of place. Are you ready to explore this amazing wilderness area?

Where Is Kobuk Valley National Park?

Suggesting that it’s close to the North Pole is exaggerating things a bit – it’s a couple of thousand miles away. But Kobuk Valley National Park, in northwestern Alaska, is above the Arctic Circle.

These 1.75 million pristine acres lie more than 300 miles from Fairbanks and around 500 miles from Anchorage. Even the headquarters in Kotzebue is 75 miles away from the park.

Why Was Kobuk Valley Made a National Park?

This dreamlike landscape of forest and tundra is an incredibly unique and sensitive ecosystem worth preserving. That’s why Congress included it in the Alaska National Interest Lands Conservation Act in 1980. The action saved it (and 14 other big parcels of land) from development.

Those vast sand dunes surrounded by wetlands, among other features, make the land ecologically valuable. The dunes cover 25 square miles today, but that’s only about a tenth of the area they once stretched. They are made of sand that drifted downstream or was blown in with distant winds.

Designating Kobuk Valley as a national park also meant saving wildlife. In particular, the park protects the roaming herd of caribou, one of the last of the world’s great animal migrations. Almost half a million of them make a 600-mile journey that takes them across the Kobuk River twice a year.

How Do You Get Into Kobuk Valley National Park?

To visit the park, you have to get to one of the nearby cities with an airport, either Kotzebue or Bettles. From there, you need to charter a small aircraft from one of several authorized companies for a scenic two-hour flight. Rates vary, but you can expect to pay several hundred dollars an hour.

These pilots can land within the park for some photo ops or even drop you off to explore on your own for a few days. Keep in mind that you need to be completely self-sufficient out here because there are no services.

Pro Tip: Unsure about what is the best way to explore Alaska? We compared the pros and cons to Seeing Alaska By Cruise or Land Tour.

How to Explore the Most Remote U.S. National Park

Getting there is just part of the challenge. While many national parks have scenic drives that let you cruise right through, Kobuk Valley isn’t like that. Other than by snowmobile or dogsled, here are the different ways you can experience this remarkable place.

When you hear people talk about “flyover states,” they don’t mean Alaska. But you may hear another word — flightseeing — which is a big thing here. It just means seeing the gorgeous land from above, in an airplane.

These aerial tours are a fantastic way to see the terrain, often with expert narration from a seasoned guide. The planes hold up to four people, and you can charter them by the hour or for a whole day.

Paddle Down the Kobuk River

In the native language, “Kobuk” means “big river,” and 61 miles of it flow within the park. To get the best feel for it, go with the slow, steady flow in a raft, kayak, or collapsible canoe. You won’t believe how tall the bluffs look from the water. Some of them reach 150 ft, have frozen wedges of permafrost, and even contain fossils dating to the Ice Age. Besides the Kobuk River, you can also float the Salmon River. It starts in the Baird Mountains and merges into the Kobuk.

Get Dropped Off at the Sand Dunes

Some of the planes can land directly on the Great Kobuk Sand Dunes, so you can explore them on foot. You can even camp there once you find a level spot.

As an alternative, you can land on the river in a seaplane and hike a few miles to the dunes. Even though this area is considered tundra, it’s not always frozen. Summer temperatures sometimes reach 100 degrees.

Camp in the Backcountry

The park has no regularly maintained trails, but you can find paths where others have gone. Many enjoy camping on the dunes or the mountainous areas because of the drier, less-spongy ground.

Many also love to visit Onion Portage, a gravel beach on a long, narrow peninsula where wild onions grow. But also look for the caribou tracks as this is where those massive herds cross the water.

People have been visiting Onion Portage for a very long time. We know this because of evidence from archeological digs going back at least 8,000 years. That’s significant because, before these studies in the 1960s, historians believed this region had only had inhabitants for 5,000 years.

The artifacts that researchers have uncovered here give clues to the lifestyles of what may have been the continent’s earliest human inhabitants. So, this place is more than where caribou cross the river.

Are There Any Campgrounds in Kobuk Valley National Park?

Due to having no roads or maintained trails, the park doesn’t have any established camping areas. This makes for an authentic backcountry experience, wherever you decide to roam.

You’ll need a permit from the park headquarters, called the Northwest Arctic Heritage Center. They also have tips on where and how to camp. As you can imagine, they strongly encourage you to use the standard “leave no trace” practices.

Pro Tip: Alaska has so many stunning national parks it can be hard to decide which ones to prioritize, but this is Why Katmai National Park Should Be on Your Alaska Bucket List.

When Should You Visit?

This part of the world has extreme weather, so it dictates when you should visit and when you shouldn’t. Summertime temperatures are the most bearable but still unpredictable. Typical temps in the summer range from the mid-60s, with highs into the 70s and 80s.

Average lows in January reach -8, and they can dip as low as -50. Summertime visitors can also expect lots of daylight. In fact, because of its proximity to the Arctic Circle, the sun doesn’t set at all for almost five weeks, starting June 3.

Unfortunately, June and July have the worst mosquitoes, and they might just be the smallest of your worries. Besides packing insect repellent and extra protection like bug jackets and head nets, you’ve got lots of careful planning to do.

Remember, the park has no roads, trails, or campgrounds. You won’t even get a cell signal. This is roughing it in every sense of the word. Of course, you’ll need proper footwear, but also layers of non-cotton clothing to protect you from hypothermia. If you have an emergency, you won’t find any rangers nearby.

Along with a topographical map and a compass, pack a satellite phone, maybe a PLB (personal locator beacon), and a GPS unit with extra batteries. When traveling through bear country, you’ll need pepper spray and an animal-resistant container for your food, garbage, and toiletries.

Additionally, you’ll need to know what poisonous plants to avoid and how to ward off those mosquitoes and other pests.

If you even have a remote chance to visit this incredible area, go for it. But keep in mind that taking off to northwestern Alaska is not something you should take lightly. A trip like this takes a certain level of physical fitness and lots of planning.

While a bird’s-eye look from a plane is a real eye-opener, staying overnight in this rugged country can make an unforgettable adventure. Seeing Kobuk Valley National Park first-hand isn’t for the faint of heart, that’s for sure. Alaska has eight national parks, and all have their own unique characteristics that make them worth visiting.

While many memorable outings are a walk in the park, visiting this place is nothing short of an ambitious endeavor. It’s somewhat difficult to even get inside Kobuk Valley and physically demanding once you get there. But that’s what makes this trip of a lifetime so rewarding.

What’s been your most challenging outdoor experience? Tell us your story in the comments! 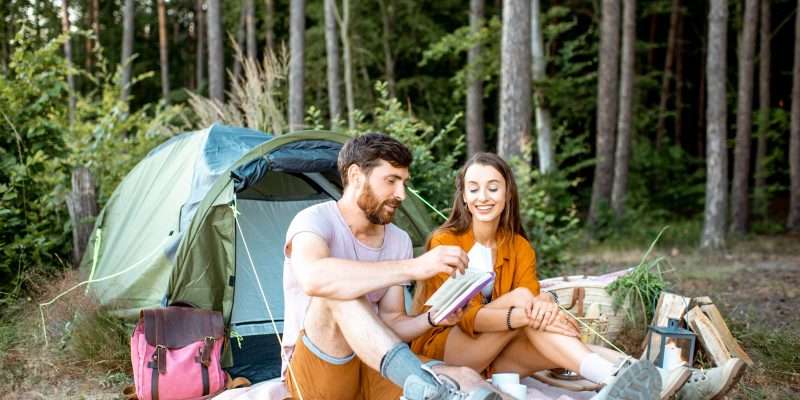