​Sometimes it’s about the journey, not necessarily the destination, and our journey to Alaska was taking us to many incredible places. We’ve found that traveling by RV is not only a comfortable way to visit some amazing destinations, but also has the benefit of allowing you to slow down and find adventure in the places in-between.

Watch on YouTube
Watch on Amazon Prime
​The long days were starting to mess with our schedule a little bit, and because of this we got going later than we planned from Watson Lake. That meant that we reached Johnson’s Crossing late as the sun was starting to threaten to dip below the trees (it was probably around 11:00pm). As luck would have it, the small convenience store was still open, and we were able to get fuel and a Yukon Territory fishing license for Tom (new province, new license) and continue on to our next adventure: the Canol Road. 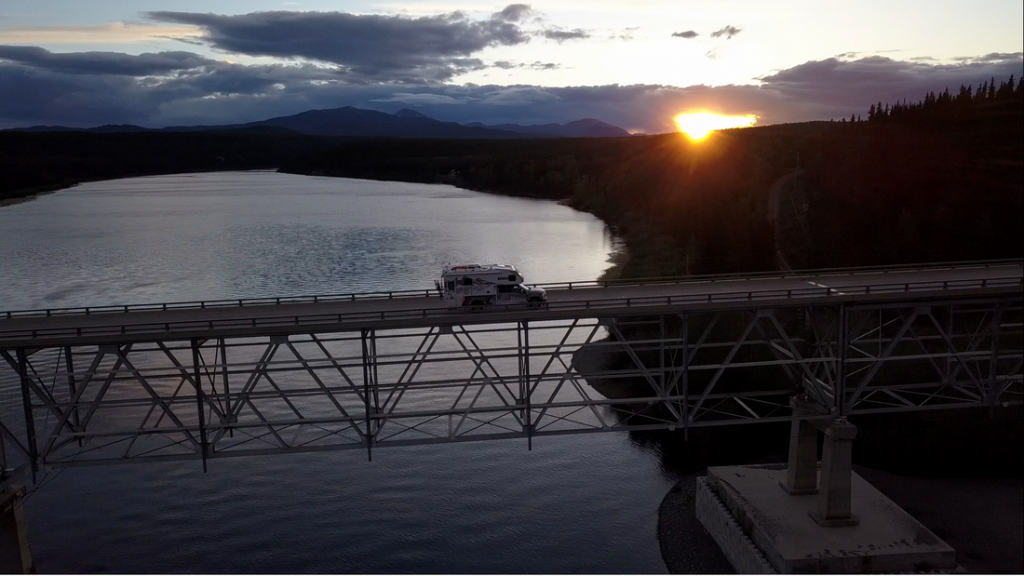 ​Canol Road was built for the Canol Project. Canol, short for Canadian-Oil, was a project started in 1942 to build an oil pipeline from Norman Wells, NWT to Whitehorse, YT where a refinery was built. Funded by the US Military to expediate the project, the oil was intended for vehicles and machinery used to build the Alaska Highway during World War II. The pipeline was completed in less than 2 years and employed 20,000 people to build it. After the war ended, the refinery and pipeline were no longer needed, for they were both costly to maintain and not very productive. The pipeline and the road were pretty much abandoned less than one year after the project’s completion.
​The remaining roadbed is kept open by the Yukon Government for seasonal use and recreation purposes only, and not recommended for large RVs or vehicles without high clearance and four-wheel drive. It is divided more or less into 2 sections: South Canol Road which runs from the Alaska Highway about 216 km (134 miles) up to it’s intersection with the Campbell Highway (Hwy 4) south of Ross River, and the North Canol Road which runs from the Campbell Highway up to Norman Wells, NWT the remaining 233km (145 miles). ​We also heard that if it rains, the road was absolutely terrible. We had checked the weather when we were still in service and it looked clear for the 2-3 days we planned to be on the road. The first night we camped about 15 miles up the road.
Regardless, we awoke to a sprinkling of rain on the roof. We loaded up and started making slow progress on the wet road as it wound through the trees and valleys. The rain started again, and we nervously proceeded over not one but two sections of muddy water flowing over the road. 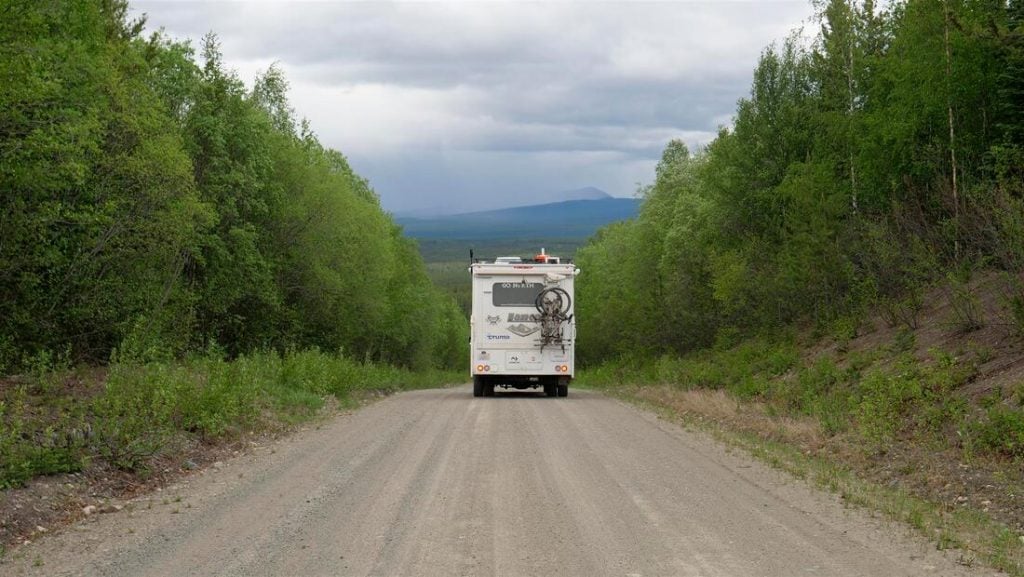 As luck would have it, a couple miles further down the road we broke free of the weather and found sunshine and dry dirt. After a few hours of taking our time over potholes and road-encroaching brush, we arrived at Quiet Lake North Campground, and we had the place all to ourselves – or so we thought. 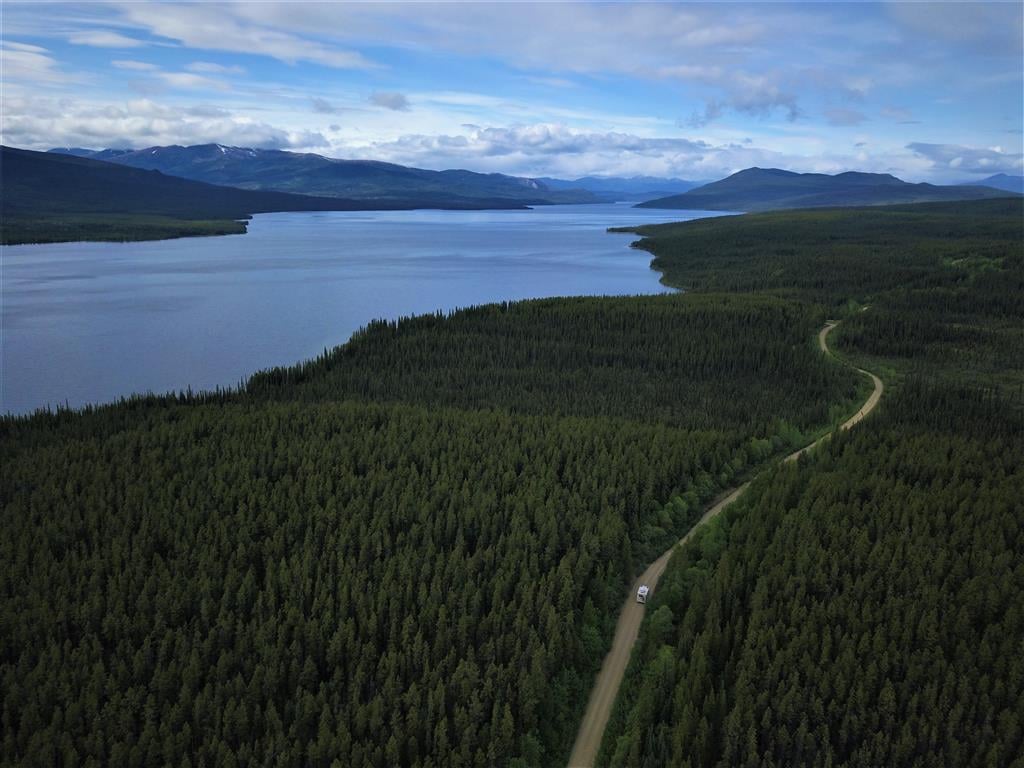 ​Just as we were settling into bed, we heard a peculiar noise and some scraping coming from under the truck! We sprang out of bed and cautious but quickly clambered outside.
We quickly discovered that a porcupine had crawled up on top of the spare tire and was chewing on something. After a few shouts and kicks to the tire, the fellow dropped down and scampered to the woods. We chased after him loudly, wanting to make sure he wouldn’t be back again. As we walked back around to examine the truck, we heard another squeak…from under the truck. There was another porcupine under there!
​This one was much more stubborn, or scared, than the first, and it took us the better part of an exhausting hour to get the porcupine out from under the truck, as it kept going back and forth from the spare tire to wedging itself up on top of the fuel tank. It took two sticks and some good timing to push, prod, and gently knock the porcupine down from the drive shaft as it moved from one hiding place to the other.
​Half an hour later, around 2AM as we drifted back to sleep, we heard the distinct scrap of quills on metal.
“It’s back,” I groaned into my pillow, and we both reluctantly sprang from the bed to hopefully catch the thing before it climbed up into the truck again. Thankfully, we did, but it was clear that we’d have porcupines bothering us all night. 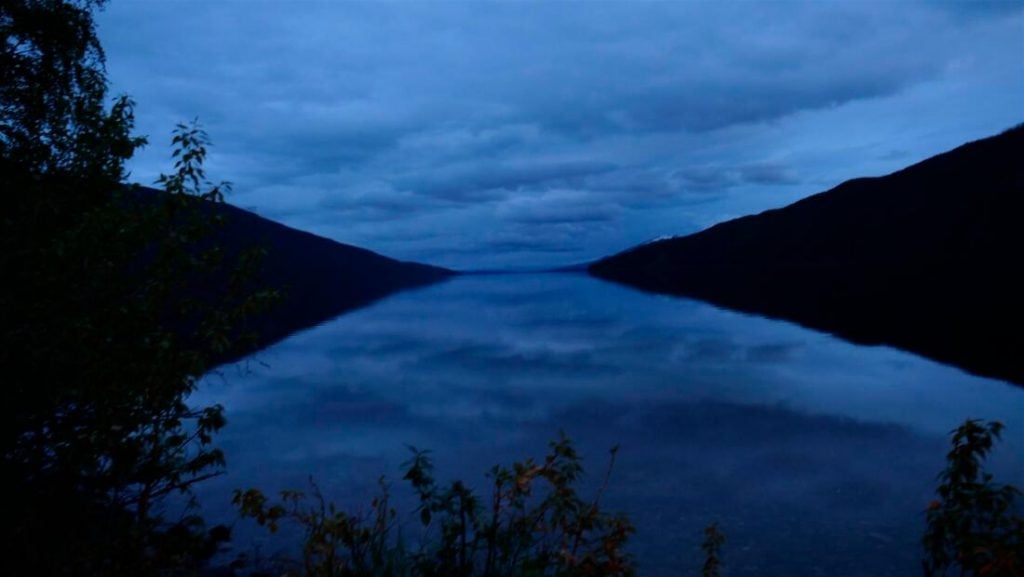 ​We packed up and prepared to move – which took a little longer because we had let the air out of the Hellwig Big Wig Airbags to help with leveling at our site, so needed to get out the air compressor to refill. Since the air compressor was out, we topped off all of the truck tires too. When I climbed into the driver’s seat to pull out of our site, I saw something that made my heart sink.
​“I hate to tell you this, honey,” I said to Tom as he got in. “The Check Engine light is now on.”
​Amidst a string of exasperated curse words and exclamations, we had nothing else to do but to drive out of our quiet campground and down the twilit road in search of the next turn-off that was far enough away that the truck-loving porcupines couldn’t find us. First priority was to inspect the underside of the truck, but we had no desire to climb under the truck with all the porcupine quills everywhere.
​Our pull-out came in the form of the Quiet Lake Maintenance Compound just a kilometer or two down the road. We pulled off and Tom immediately climbed under the truck to identify the damage and try to find the cause of the Check Engine light – suspecting a chewed wire. It took no time at all to find chewed insulation (heat protection from the exhaust), some knicked wires, and – Bingo! – a completely chewed-through wire.
​Our fear was that if it had something to do with the exhaust system, if we drove too far like this the truck might put itself in “limp mode” to protect itself, which we’ve heard horror stories about. It could de-power the truck and prevent upshifting, making it so we could only go about 20mph…being that we were out in the middle of the 226km-long Canol Road, this was something that we desperately wanted to avoid. The concern was that if it went into limp mode, we might not be able to get it out, even if we were able to repair it. We couldn’t drive any further.
​As we crawled into bed for the 3rd time that night, we laughed and cried in our sleep-deprived delirium at the bizarre events of the evening and the new frustrating problem that needed to be solved before we could move again. We hit the pillow as the still-glowing sky started to brighten. 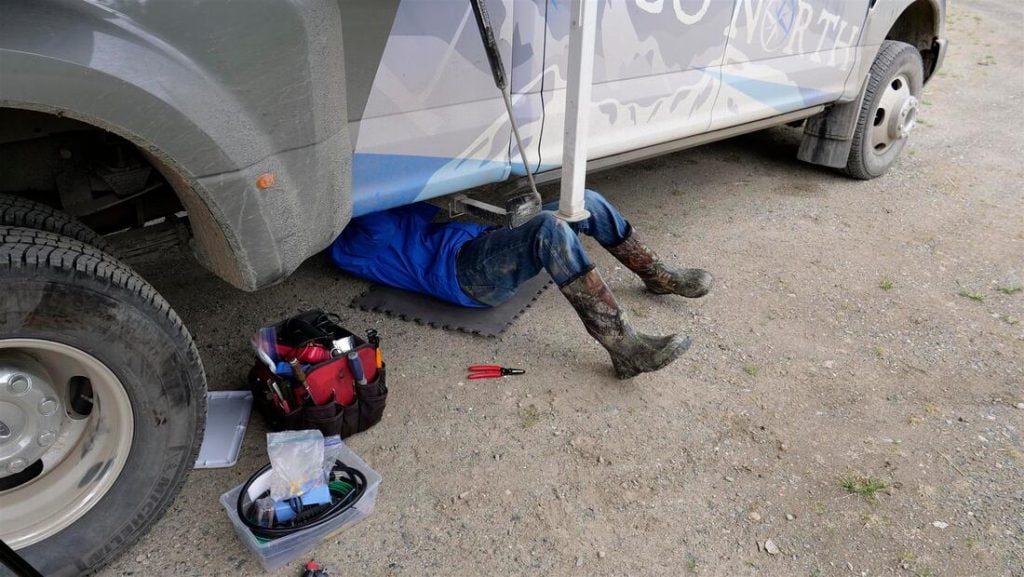 ​We were on our way again.

Continuing Up The Road

​The road opened up to a large river valley winding through the Pelly Mountains and alongside the Rose River, making us gape at the amazing scenery. The road still had many potholes, but we were content to drive the slow speeds required so that we could gawk as new mountains and lakes came into view. We stopped at one of the Lapie Lakes to do a little fishing and admire the snowcapped peaks from water’s edge. 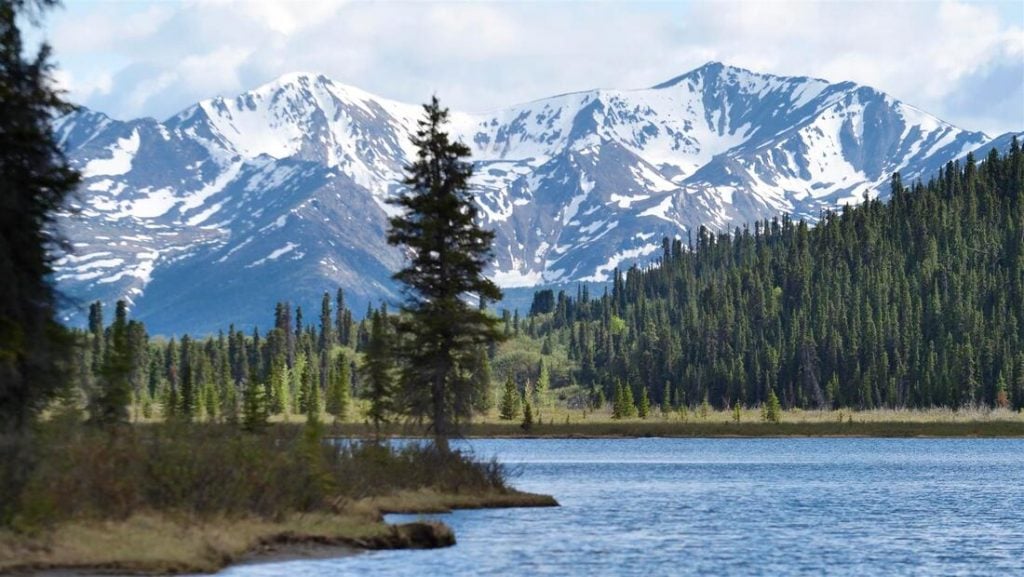 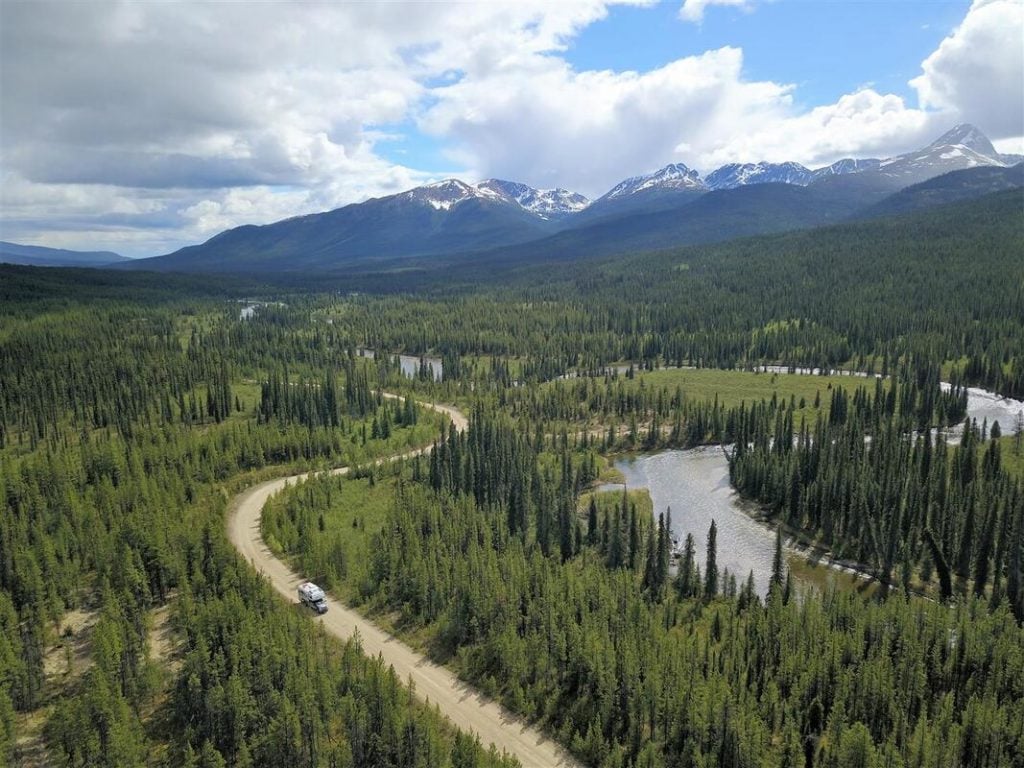 ​Shortly after this stop, things got a little bit more interesting as we slowly ascended away from the valley floor up along the mountainside, and the river dropped fall below us in increasingly dramatic views. This was fine, until we hit a bit of wet, slippery mud leftover from some prior weather.

Things Got a Little Scary…

​This mud caked to our tires, virtually illuminating our traction. We were very thankful for the 4-wheel-drive of the Ford F350, and even popped it into 4-Low to tackle several particularly daunting hills. We only had one incident where we slid with a sickening helplessness towards the edge of the cliff – the “Do Not Drive When Wet” rule is serious folks! 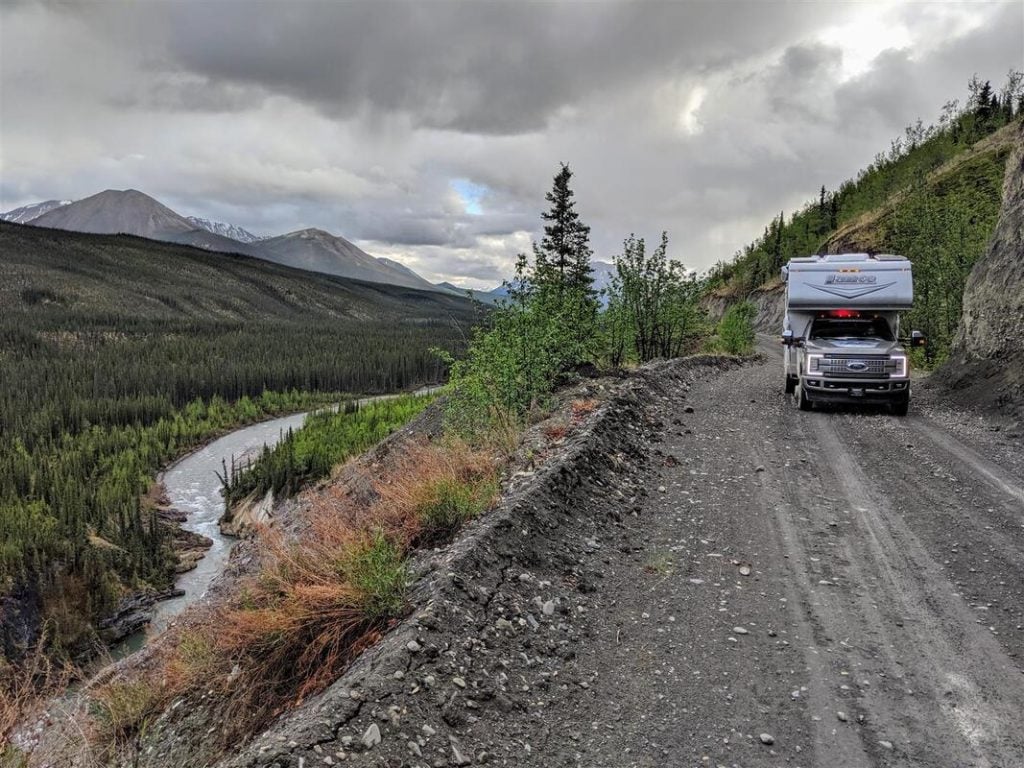 This road was terrifying in the truck camper

​Fortunately, the drive dried out shortly after the worst of it, and we proceeded down the Lapie River Valley and across the remaining one-lane bridge over the beautiful Lapie River Canyon. One final steep, one-lane rocky cliffside climb and we were homefree, and happily turned onto the Campbell Highway. While it is a dirt highway, compared to the Canol it felt like the smoothest road in the whole world! We glided into the nearest Rest Stop to make some dinner and plan our next stop. 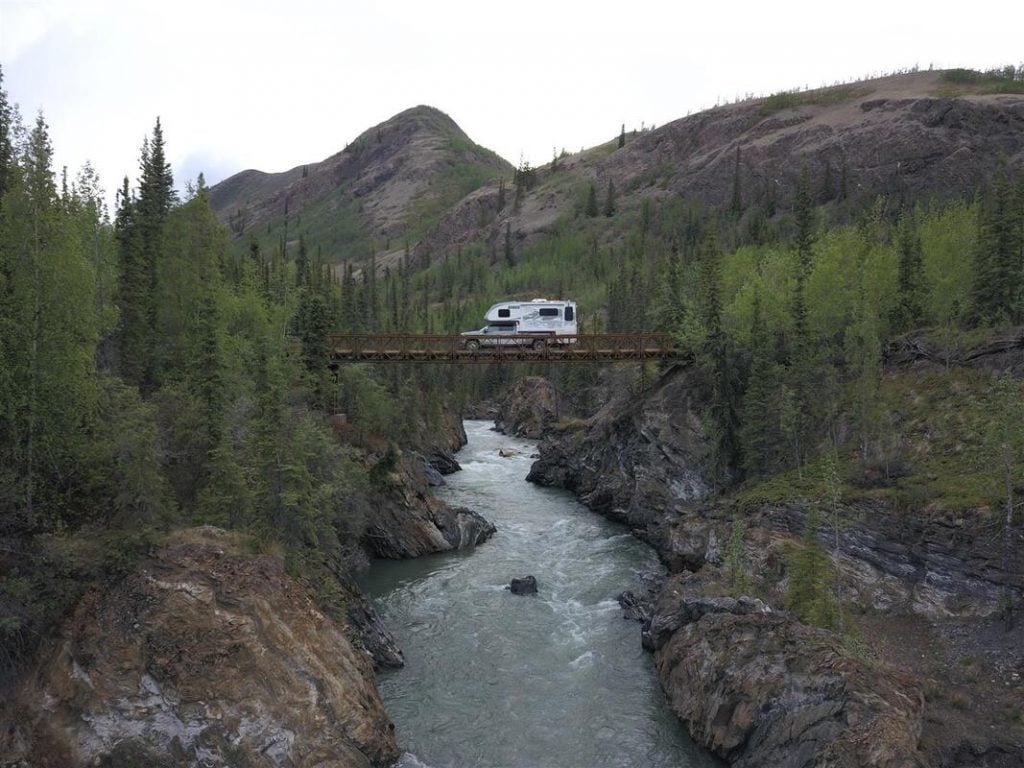 ​Overall, we were extremely grateful for the four-wheel drive capability, the Hellwig suspension that saved our bums and everything in the camper from rattling to pieces on the rough road. We were also very impressed with the performance of the Lance truck camper on this first real back-road excursion. It was indeed scary when the mud completely caked the tires, but the drive really was exhilarating with some incredible views! 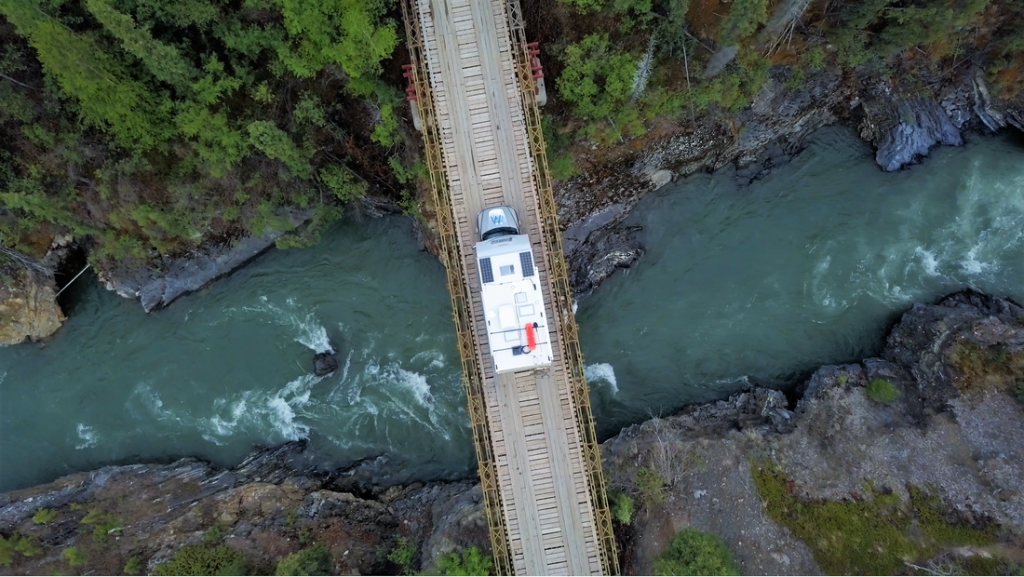 ​We would very much discourage attempting this drive with a larger rig, and would not drive it ourselves in ANYTHING if it has been raining. We saw a couple of vans, 4×4 setups, and another truck camper, but thankfully nothing bigger or less capable. I daresay that the Lance 1172 was the biggest thing out there that we saw, and she definitely kept us comfortable while boondocking in the most remote place we’d been with her yet!
Continue reading about our journey on
The Klondike Highway, Dawson City, Top of the World, and Entering Alaska!

Found you a short while back and I am really enjoying your videos. Regarding the porcupines chewing on your wires.The 'plastic' covering on new vehicle wiring is soy based (at least it is on my Tundra) and have heard that this could be a problem. One deterrent that was passed on to me, is to spray the underside of your vehicle (or at least the exposed wiring) with Pinesol. Good luck and safe travels!

Hi Michele, Thanks for watching and we are glad you're enjoying! We ran into a local who told us something similar. Appreciate you sharing the Pinesol tip! :D

The porcupines were quite a surprise. I've had some critter damage in the past but nothing like this. By the way, I really like the 3D map effect you use. Would you share with me how you create this - what editing tools/software you use for it?

We were very surprised too! lol Glad you like the 3D map effect! Tom bought a Map Route Generator script that we run on Adobe After Effects, and we recently partnered with Alaska.org to use their maps of Alaska for the imagery. It's not as intuitive a tool as we'd like, but it's been working for our needs for this production :)