Skip to Content
This post may have affiliate links.
Travel Stage: After Palm Springs CA, before Lake Havasu and Sedona
Date Range: January 13-27, 2017
Summary:  We have an amazing, whirlwind, everyone-got-sick, made-lots-of-friends, energizing, inspiring, exhausting time at the Xscapers RV Convergence in Quartzsite, Arizona!
​
​We arrived in Quartzsite on a beautiful sunny day! The Xscapers group had chosen to set up camp near Dome Rock – a unique rock formation on the west side of town. We pulled in with Josh and Kali of The Freedom Theory and set about finding a good spot that was big enough for a few rigs to cluster and had decent cell service so we could keep working throughout our stay. 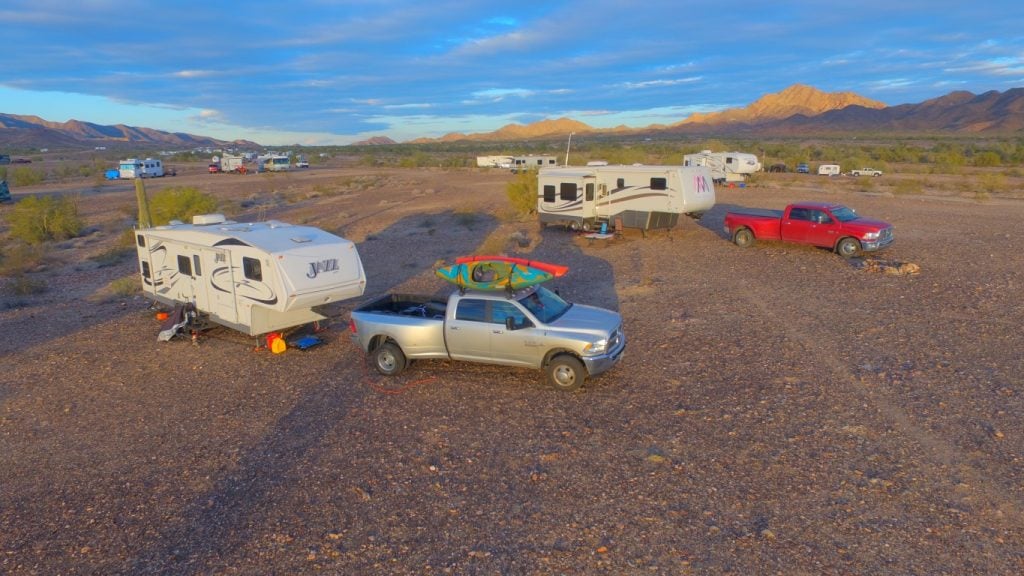 ​Why Quartzsite is Great for Boondocking

​Most of the area around the town of Quartzsite is pretty flat and is made up of hard rocky ground. This means that you can drive pretty much anywhere. The area around Dome Rock however is a bit more hilly and uneven, but we still managed to find a spot that met our needs. 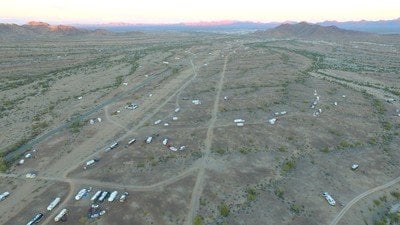 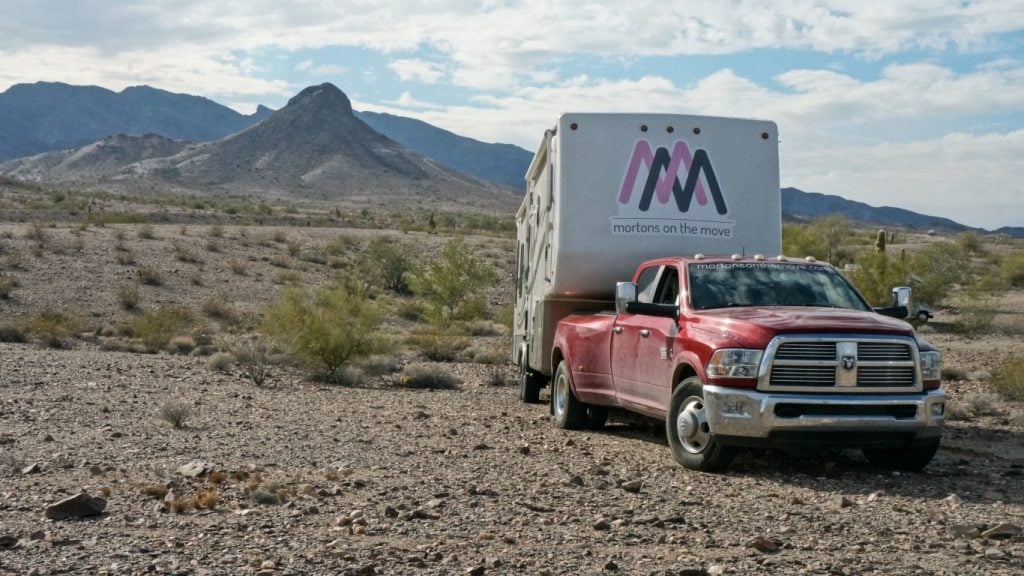 ​About 60 rigs showed up for the Xscapers Convergence! That’s a lot of RVers! Xscapers is a subgroup of Escapees that is specifically for full-time RVers who still work on the road. It was so interesting hearing about all the different jobs that people do working remotely from their RVs! We had everything from workampers to video game designers, firearm instructors to engineers.
Visiting The Largest RV Gathering in the World, Quartzsite AZ - Mondays with the Mortons
Lots of talks and events were planned for the 2 week convergence, from solar discussions and Instant Pot demos, to Margarita and Guacamole making contests and Australia Day! 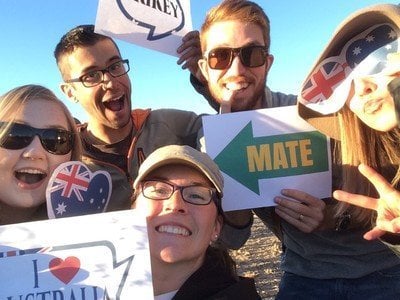 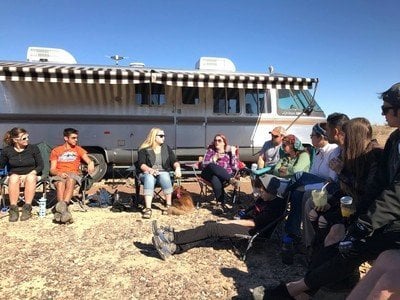 ​There were also a number of bloggers and YouTube vloggers that we recognized, and it was so much fun to meet people in person that we had met and known through YouTube or other social media outlets! Some of the names you might recognize are:
​We had lots of time to make new friends and connections. It’s very easy to find things to talk about with people who are of a similar mindset and have similar experiences and struggles, like getting internet in remote areas, setting up for boondocking, dealing with black tanks (sewage), living in small spaces, having too much to see in too little time.
Cheap RV Living in Quartzsite, Arizona & the Desert Bar - Mondays with the Mortons

​Once we were all feeling better, we hopped in the truck with Josh & Kali of The Freedom Theory who we had become great fast friends with and took off on a day adventure out to one of the most remote watering holes there probably is. It’s simply called “The Desert Bar” and it is nestled in the desert mountains that takes miles of off-road driving to get there! They serve beer in plastic cups, but the nachos are GIGANTIC– and easily fed all 4 of us! 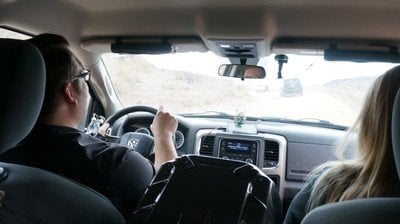 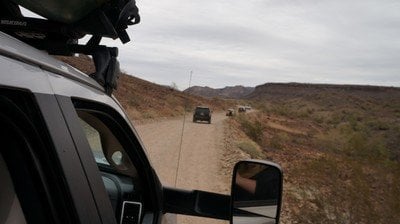 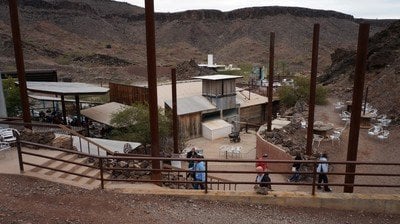 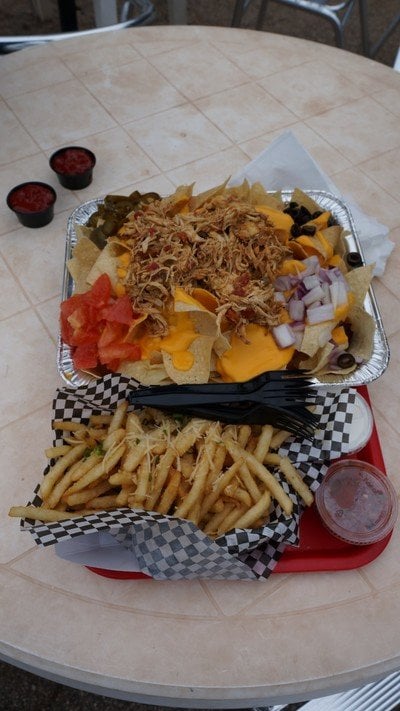 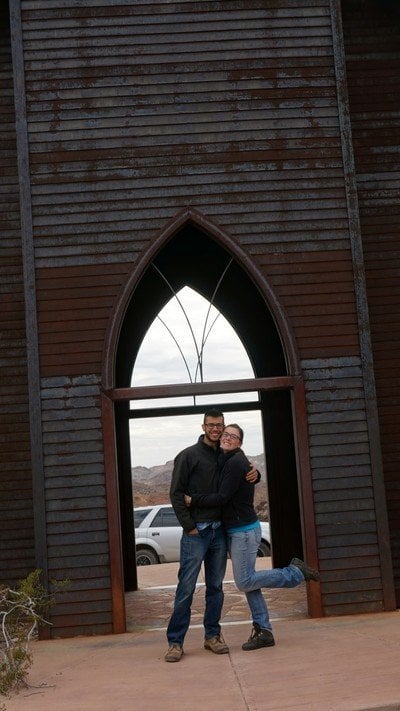 ​
THIS PLACE EXISTS? OFF GRID DESERT BAR Parker, Arizona 🏜😍 Full Time RV Living 🚌
We had so much fun hanging out with these guys. They are originally from Washington state and have been on the road for a little longer than us. They have an awesome (almost daily) vlog, and are some of the sweetest people in the world! You can check out our Desert Bar visit in their vlog above.

​As I mentioned in the previous blog post about Preparing for Quartzite, we had our whole team of fulltime RVers physically together for these two weeks to launch our new collaborative YouTube channel, Road Gear Reviews. We did a lot of filming, channel setup, and more team building exercises (like Cards Against Humanity 😉 ) during this preciously rare time where all 4 traveling couples were in the same place at the same time. We got everything ready to go and launched the channel on Febuary 1, 2017.
We’d love it if you could check out our new channel, and if you have any products or upcoming road gear investments you’re thinking of making, let us know! We want to give you our experience and thoughts to help you make good decisions.
>> Click Here to Check Out Road Gear Reviews! <<
Welcome to Road Gear Reviews! Gear Up For Your Adventures with Fulltime RV Travel Experts
You can also follow us on:

Quartzsite ended with a bang – a big final bonfire and a goodbye breakfast potluck. We said goodbye to many of our new friends, but didn’t have to for several others: we had made plans and rounded up people interested to head north to Lake Havasu City for a few days! The Freedom Theory, Duet Justus, Spot the Scotts, Explore Everything, Serendipitous Journeys, and Super & Sunshine all caravanned north to more BLM boondocking land just south of the lake for more socializing and fun! 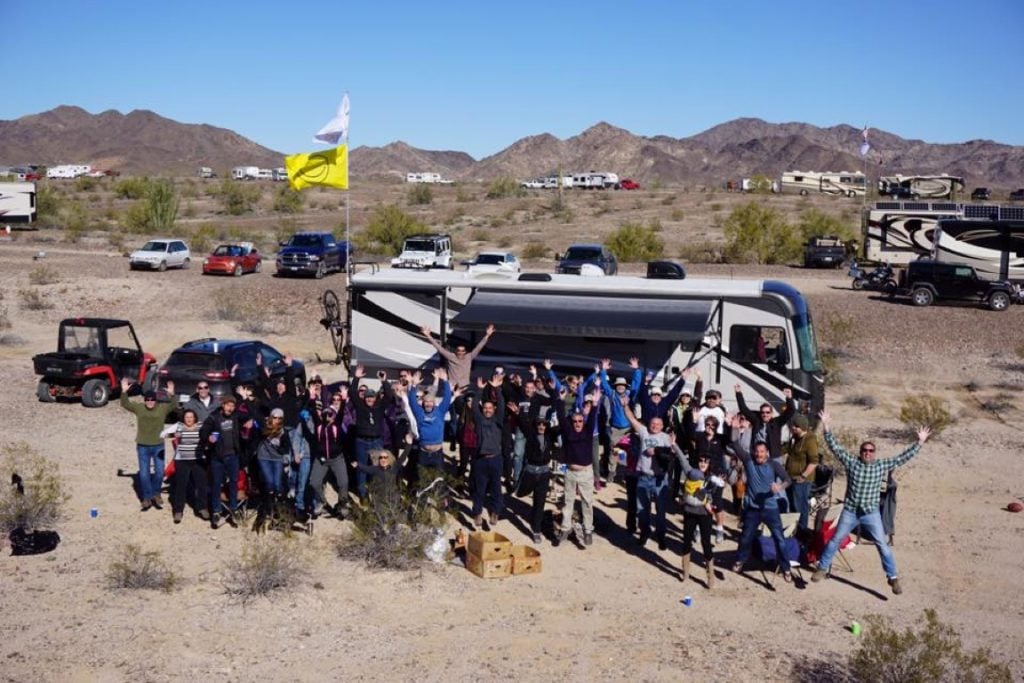 Dome rock is a lovely place for the visit. Good place for teamwork. Beautiful place and the people are very friendly. They easily become the friends. The atmosphere of that place is very good but has some dust. You can also visit that rock.