An electric vehicle revolution is underway, and it’s not just electric cars. E-bikes are ubiquitous, but we have found electric mobility of another type to be so fun and useful. Self-balancing Segways were originally large and not portable, then cheap “hoverboards” became fun kids’ toys. However, a middle-of-the-road product called the Segway Ninebot S Plus provides a fast and efficient way to travel short distances. We have traveled with one of these vehicles for many years, so let’s take a deeper look at this awesome product.

Pure Joy Can Be Found With the Segway Ninebot

The Segway S Plus is a portable version of the company’s larger self-balancing Segway mobility device. The larger versions have found their way primarily into use with tour operators, law enforcement or commercial applications. The S plus, however, is a small portable version you can easily pick up and toss in your car. In fact we have traveled with one of these from Florida to the Arctic Ocean! 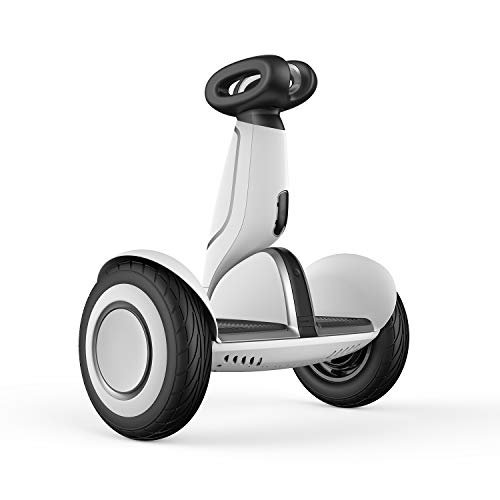 We originally purchased the unit to use for filmmaking as it allows us to move the camera smoothly. However, we discovered it to be a totally fun and useful tool for daily use. From dragging trash cans around and carrying heavy loads to running up to the office at a campground, we have put hundreds of miles on our unit.

In addition to being useful its also just a ton of fun! Lots of people have seen us riding it and asked to give it a go! Most can learn to ride it in a few minutes and it has spread many smiles.

What Is a Segway Ninebot?

The Segway is for anyone looking for short-distance commuting, moving around a property or just fun. It is a self balancing two wheels scooter that moves along at 12MPH On a full charge, the Ninebot can travel up to 22 miles before needing a recharge. Its heavy-duty construction can handle potholes and road hazards without harm, and the scooter is rated for up to 220 lbs.

Hill climbs are no problem, as the Ninebot can handle roads with slopes up to 20%. Speeds up to 18.6 mph are typical, and with rear-wheel drive, the scooter has excellent stability and maneuverability. It has 10-inch pneumatic tires and a 329-watt-hour battery.

The dual braking system provides excellent stability, and with a regenerative braking, you will gain power when stopping. The electric scooter has fenders, a bright LED front light, and it’s water resistant.

With a long driving range, you will not need to recharge the scooter in the middle of a commute. Plug it into the fast charger at night, and the Segway Ninebot will be fully charged in six hours. Coupled with a phone app, you can customize your daily ride and track trip statistics.

What Can You Use the Segway Ninebot for?

We have used the unit for all sorts of things, from filmmaking to picking up groceries. Because your hands are free when riding, you can easily carry two bags and have a backpack on. We have used it to push trash cans, drag heavy tarps, and even set up at conferences by hauling heavy totes.

There was even a time when I broke my toe and was using the Segway to get around town because I didn’t have to walk.

Its also for those just looking for a fun ride. While it’s not super fast it’s quicker than a run and much easier. When hauling heavy things, it also is much easier on joints as there is no bouncing.

Pro Tip: Travel with your Ninebot Segway by packing it in one of these 3 Smallest Toy Haulers for Bringing Your Toys Camping.

What Does the Ninebot App Do?

The Ninebot app works through Bluetooth, allowing you to lock or unlock the scooter and even drive it remotely. You can also check the battery level, select a driving mode, and keep track of mileage and speeds. The app can also change the colors of the lights on the unit and set max operating speeds for beginners.

Can You Ride Ninebot Without App?

How Fast Does a Segway Ninebot Go?

The Ninebot Max can travel up to 12 miles per hour and will handle grades of up to 15%. It has three driving modes: economy, standard, and sports modes. You can access them from a dashboard on the handlebars.

How Much Does a Ninebot Cost?

How Long Does a Ninebot Scooter Last?

The internal battery in a Segway S Plus is rated to last through 500 charging cycles. Depending on how often you use the scooter and charge it, the Ninebot could last between two to five years. We have had ours for 5 years and it’s still going strong!

Pro Tip: Don’t think a Ninebot Scooter is right for you? An E-bike may be more your style. Learn more about What Is An E-Bike and Why They’re Great for Camping.

Is the Segway Ninebot Worth It?

If you’re on the move a lot like us you may find a lot of use in a tool like the Segway. It’s a ton of fun and brings smiles to faces everywhere we go. Is it a necessary product, defiantly not? However, we have loved ours and would probably replace it if it broke at this point. When we bought ours, the price was half what is now, and at that time, I would have said heck yes, its worth it. But at $900, it seems a bit steep for most compared to something like an E-Bike.

Where would you go with your Segway Ninebot? Tell us in the comments!