Gone are the days of preparing a picnic lunch for an afternoon at the park, only to find soggy, wet food when you arrive. Coolers that require ice are becoming a thing of the past. Solar powered coolers can work as refrigerators and even freezers. No extension cords are necessary to keep a solar-powered cooler operating, as it runs on portable power stations or power banks that accumulate electrical currents from solar panels. Let’s see how they work and which products are the best for your needs.

What Is a Solar Powered Cooler?

Some solar powered coolers have power banks you can disengage from the appliance and charge directly from a solar panel. You would then reattach them to the refrigerator to power the compressor.

Most of today’s solar powered coolers work exceptionally well. They are efficient, drawing around 45 watts of power with a compressor, then 2 to 5 watts when keeping the temperature steady. However, because they are portable, unlike a residential refrigerator or freezer, they sometimes must work in extreme temperatures. Their power draw is a little more challenging to predict if they must work harder in a hot car or on a sunny day at the beach.

What Is the Advantage of a Solar Cooler?

The most significant advantage of using a solar powered cooler is its portability. You can take it anywhere without requiring plug-in electricity like 120v or 12v. If the cooler has a battery pack or runs off power from a portable power station, it can maintain the temperatures on the product manuals.

Pro Tip: You might be surprised to hear that people steal camping gear! Use these tips to keep your stuff safe.

Enhancing any road trip, picnic, or trek to the beach with your favorite foods and beverages is a necessity these days. But keeping fresh ingredients and drinks cold can be challenging on a hot summer day. We’ve found the solution and selected five of the best solar powered coolers to make any trip more refreshing!

About: The Dometic CFX Series includes 25, 35, 45, 55, 75, and 100-liter units that can freeze or refrigerate. They use 120v or 12v electricity, and you can monitor them by Bluetooth or wireless internet on a smartphone. Each unit has a battery protection system, and once they reach your desired temperature, the Dometic uses nominal wattage to keep food cool or frozen. 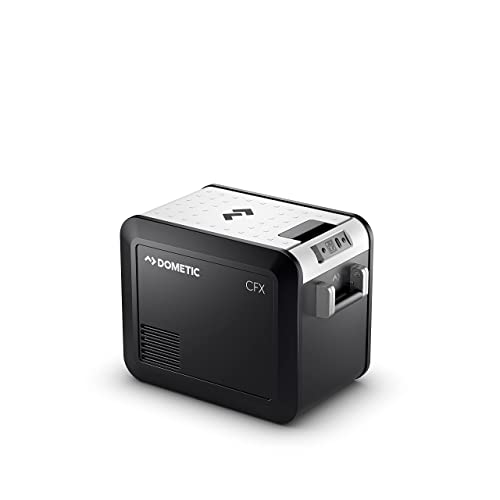 About: The Acopower solar cooler comes in three sizes: 32, 42, and 52-quart units. You can use it as a refrigerator or a freezer, as temps can be as low as -4 degrees Fahrenheit. You can control it with a smartphone app via wifi or Bluetooth. It is a portable design with wheels and weighs 33 lbs.

Watts of Solar: You can charge the removable lithium battery directly from a 12v solar panel. A 100-watt panel will take several hours to recharge, but you can plug the refrigerator into 120v or 12v and run while the battery is recharging elsewhere. 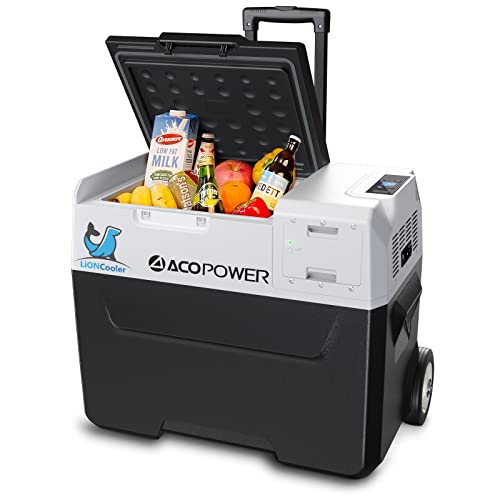 About: The Change Moore is a dual zone solar powered cooler, meaning you can have a refrigerator and a freezer running simultaneously. There are two compartments with temperatures of -4 degrees F in either or both sections. You can monitor the unit on a smartphone app, and it has a low voltage protection system to avoid running down a car battery.

Watts of Solar: If you purchase an optional battery for the cooler ($149), you can charge the battery directly from solar panels (100 watts or 180 watts). Otherwise, you can use a portable power station with the existing refrigerator to run it. The power station can recharge with solar, 120v, or 12v electricity. 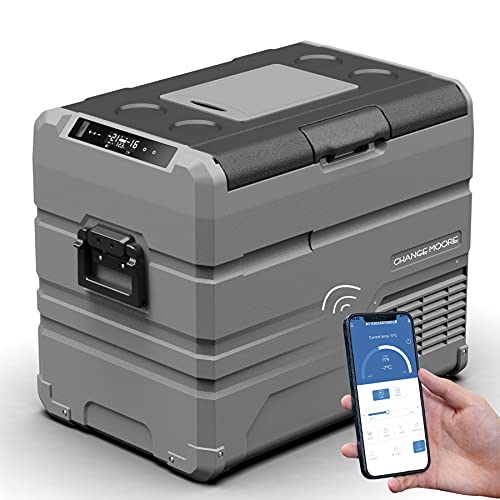 About: This 59-quart unit from BougeRV can stand alone as either a refrigerator or a freezer, with temperatures ranging from -7 degrees F to 50 degrees F. The kit comes with an 18v foldable solar panel that you can use to recharge a portable power station. It does not directly plug into or charge the refrigerator. The solar panel is on a solid metal frame, and though it is foldable, it is more substantial than most solar ‘suitcases.’ 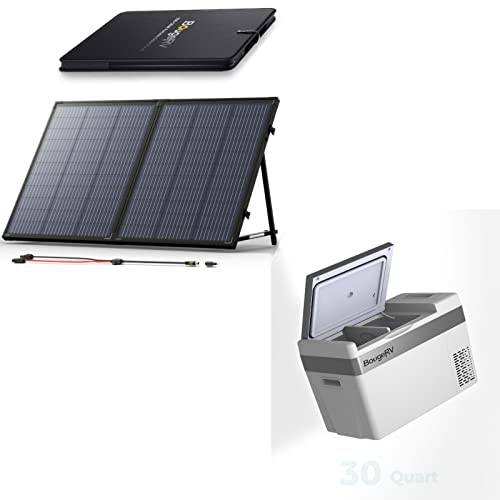 About: The GoSun 40-liter cooler runs on 120v or 12v power. As it doesn’t have a battery, the cooler can recharge with the power bank, which recharges with the solar table. The innovative table has a solar panel on it and can be used as a table, as well. It has connections to hook up the power bank and a place to hang it while charging.

Watts of Solar: A 60-watt solar panel embeds in the tabletop, which charges the GoSun 144-watt-hour power bank. The power bank inserts on the side of the cooler to power it. The solar panel does not plug directly into the cooler, but you can use the power bank to run the cooler and recharge small electronic devices. 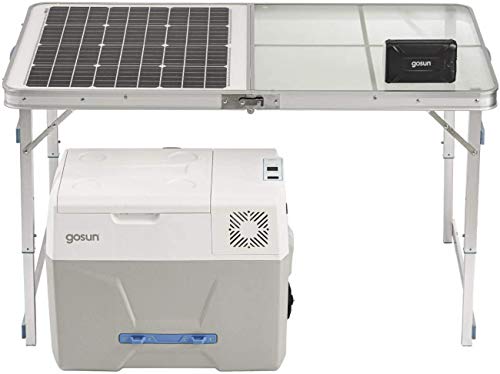 About: This dual zone refrigerator/freezer from Truma is highly rugged. It runs on 120v or 12v/24v electricity and has an interior LED light. Temperature can be as low as -7 degrees F, and you can monitor it via a smartphone app. The cooler weighs 69 lbs and holds up to 36 quarts, with removable baskets for each zone.

Watts of Solar: You can recharge the Truma with a portable power station. It cannot hook directly to solar panels for power, but the power station can recharge by solar, then pass its energy to the cooler via 120v or 12v outlets. 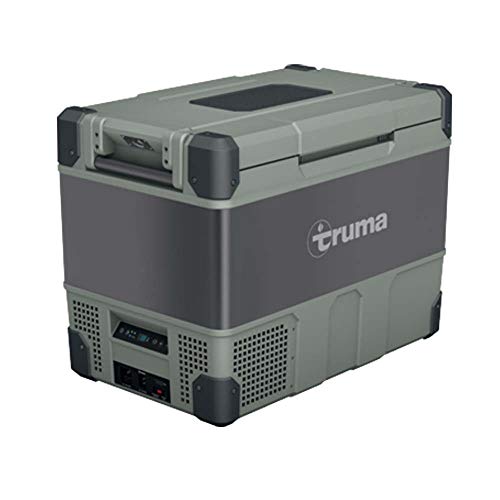 Pro Tip: A solar panel cooler is a great thing to pack on your camping trip. But make sure to avoid packing these 7 Things You Honestly Should NOT Bring Camping.

Is a Solar Powered Cooler Worth It?

Solar powered coolers can keep food and drinks cold when no power source is near. They receive their solar power from portable power stations and allow us to take along our favorite meals and beverages on picnics, to the beach, in our RV, or on a boat. In fact, we took a solar powered cooler all the way to the Arctic Ocean! What could be ‘cooler’ than that?

Looking for a portable power station to charge your solar powered cooler? Your best options are just a click away: What Are the Best Solar Generators for Off-Grid Power?